Hi i noticed that hookpad dont allow yet the input of 32nd notes and 64th notes. 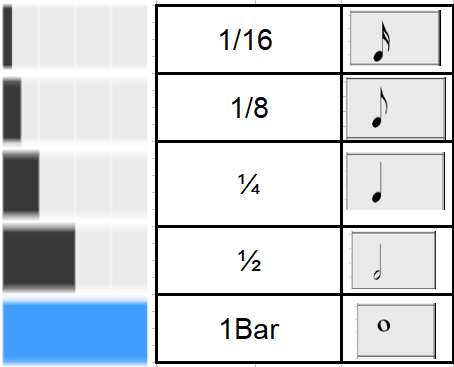 In hookpad the tinyest note duration is a 16th note when the meter is in 4beats per Bar.

May be if you allow the selection of 8 beats and 16 beats per bar ,we could now acces to the 32nd and the 64th notes? like this: 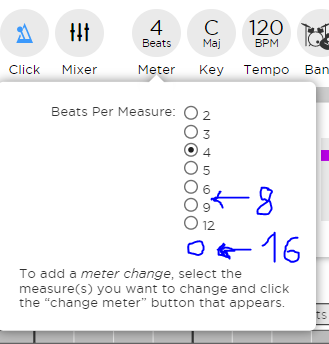 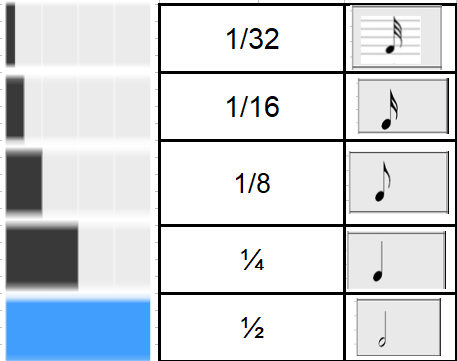 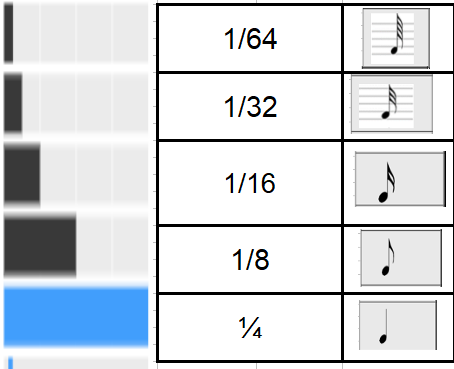 Could you please implement these features?

This would be nice to have, although they’d be so thin that it would take some zooming in to be easily visible or manipulatable. To get around this currently, I just double the tempo of my project and use the note lengths that are double of what I intend (and even faster quadruple tempo would turn sixteenth notes into sixty-fourths). The only issue there is that the drum section is now playing double-speed, but I just record the drums separately, at normal tempo, and combine the tracks in my audio editor.

Hi! Concerning the size of the tinyest “step” i think it could work!
For example in the case of 16 beats per measure (16 "beats between 2 bars) the 1/64 could keep the same width than the 1/16 in 4 beats per measure , but we will only need to drag it up if we want larger values than 1/4 (as it is in the last picture).

Concerning the doubling or the quadrupling the bpm i already experienced doubling but as you said because the drums goes twice faster you cant use it anymore as a support , in my case it kills totally my inspiration, as does the impossibility of programming my own drum patterns inside hookpad (unfortunately…)

Almost 2 month i have submited this topic .Still no reply?

@themotorizzer sorry I missed this.

We’ve toyed with the idea of smaller durations, but as you can imagine the UI is super frustrating trying to mouse over small notes.

I agree that adding new time signatures sort of gets us there, but don’t love the idea of time signatures (8/4, 16/4) that aren’t really in the spirit of the musical function of a time signature. Also we would have to infer a musical meaning to these time signatures when we create rhythms for our drums and rhythmic harmony and bass instruments, which runs into the same issues that @qclod is bringing up.

One solution to this would be for us to build in the ability to have double-time and half-time feels for Hookpad drums and rhythmic instruments. This seems like something that could bring in a lot of more flexibility, in addition to allowing you to effectively have faster notes.

Thanks for answering.
Your proposal seems to be the solution to this problem.I cant wait for it to be implemented.

Please also consider the ability to import our own audio files in hookpad as a support for composition! (since i subscribed i look every day on the forum hoping to see this function implemented)

For Hookpad it would definitely not look all that great, but when it is uploaded to the Theorytab Database, you should just make it so that by default a tab with 32nd and 64th notes are automatically zoomed in to be 2x larger. You should also have the zoom control show by default for songs with 32nd and 64th notes (even if zoom control is unchecked in the Theorytab Settings). Also please do this for triplets made of 16th notes if you ever add them (Please do).

you should just make it so that by default a tab with 32nd and 64th notes are automatically zoomed in to be 2x larger.

Or you could just zoom in.

Or you could just use double or 4 times the tempo like if you had a tempo of 88, you would have to double to 196 to get 32nd notes.

Another thing to note is that if you did so, you would need a different time signature, like 8/4 or 8/8. But that might not be a good idea since;

It’s also possible that Hooktheory could just add in the ability to edit the time signature instead of picking from a predetermined number.