My question is: What is this “bor” thing? 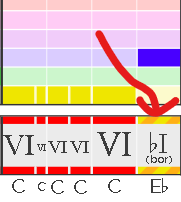 “bor” stands for borrowed. As Hookpad is a tool to learn music theory we try to point out the connection and functionality of each chord you write.
As every key has only 7 native chords every time you need another chord in Hookpad you have to “borrow” it from another scale. In pop music those scales usually are not that far away as the might have the same root note. So for example if you’re in C major and you want to play a F Minor chord you can just borrow it from the C minor scale.
In your example you seem to be in E minor so there is no close scale to build an Eb major chord from so Hookpad borrowed it from an Eb lydian scale. If you’d have searched for D# it would have borrowed it from the V of the three of the E major scale.

Lots of music theory involved here. Please let me know if this was helpful.

Ah. I see now, thanks for clarifying!