I take it the this is some sort of convention for writing inversions, but where does the 6 and 4 come in?

Its how we notate the notes in the triad above the root note that is being played. So non-inverted chords are technically 1-5-3 chords because the triad is built out of a 1, 5, and 3–but we never notate that because its implied.

Really, this article will explain better than I can, if that didn’t make sense: Figured bass is a notation in which chord inversions are indicated by Arabic numerals (the figures) either above or below the bass notes, indicating a harmonic progression. Each numeral expresses the interval that results from the voices above it (usually assuming octave equivalence). For example, in root-position triad C–E–G, the intervals above bass note C are a third and a fifth, giving the figures 53. If this triad were in first inversion (e.g., E–G–C), the figure 63 would apply, due to the i... 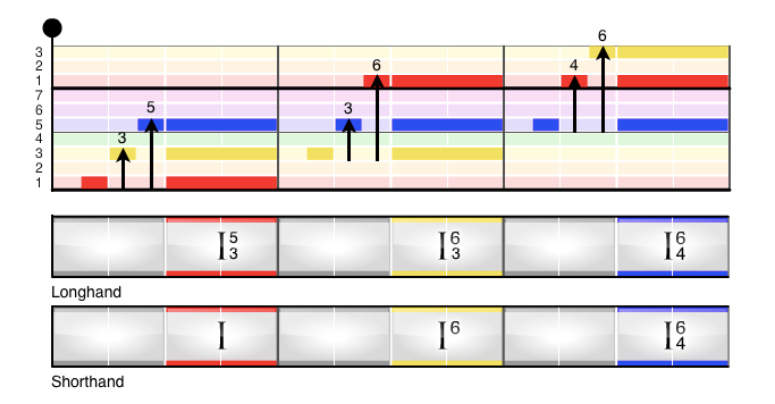 Book 2 will cover seventh chords and their inversions.

Hello Dave and thank you for taking the time to reply.

Got it about the inversion numbering… it is simple really… the above image helped!

Hi and thanks for the input…

This isn’t a major problem, in the grand scheme of things, just one of those simple things that pokes my simple brain!

I was thinking the same thing, but after seeing Dave’s post, I believe it’s because of the way that we read music, where the higher intervals are higher up visually. This matches with the way we number the inversion because the lower interval is on bottom.

I think your right… thanks for your time!

Dave, your two books are the best books about chord progressions I’ve encountered. Thank you. But I have to say your inversion notation is non-intuitive to me.

I understand it is “correct” and “common”, and I get the maths behind it, but it doesn’t help me as a guitar-based songwriter at all. It’s the only feature of Hookpad that I don’t like.

And I love Hookpad. The highlighted chord scale degrees (“Stable” feature) are wonderful.