I’m messing around as most of us do, trying out the slide from one chord to the next… Example: C to Am.

To give a bit more interest, you can slide from C to Am by lower, or raising Am by half a step.

If you have four beats to the bar, the first 3 are C, then one beat Bb and then onto Am. Hope that makes sense?

In the melody section you do get clear options, in your face, to do this, but
there doesn’t seem to be a way to raise or lower a chord by half a step?

I could be missing the obvious, but please just give me a hint where the option is?

There is, indeed, no way of (easily) moving chords up and down half steps. You need to replace manually through modal borrowing (switching to a different key in a different mode, placing the chord, then returning back to the original key and mode), or using the chord search feature to search for the chord.

The last part of your solution sounds like the easy way…

As for the first part… well I’m sure someone understood it, but for me… not a word entered the brain to stay!

But, thanks for your time! It gave me a solution and thats all I wanted!

So the first way is for taking advantage of how some chords just can’t exist in certain keys using plain I-II-III-IV-V-VI-VII chords.

For example, in C major, you can’t have any chords with an accidental as the root note. Let’s say I want to put in C# major; by default that’s impossible because its root note is not in the C major scale.

So, I need to switch modes (using the Relative setting) to change the root note of the scale. 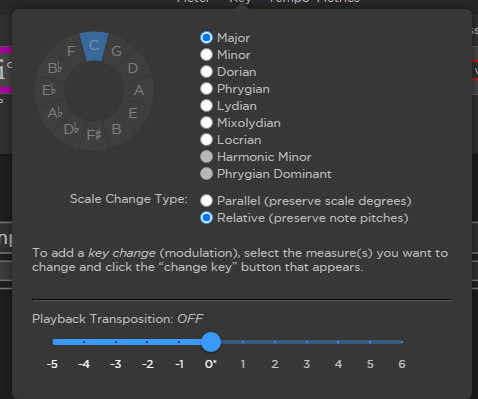 We need to change scales so that we can find a mode that, when I borrow from a different mode, will have C# in its scale at a spot where it can be the root of a major chord.

In major keys, the major chords are I-IV-V. So, we need to find some scale that has C# on scale degree 1, 4, or 5. If you try this, you’ll find there is no such combination, so you need to pick a different mode.

It takes some searching to look for the correct combination of relative mode and borrowed, mode, but it is possible to get chords of any scale degree of any quality (without extensions) in this way (though it may not be analytically correct in the context of the song).

You can also use the Search function, Tone Sets, and Bass Sets to get the chord you need as well.

I’m just a humble Keyboard player and have not studied music in great depth or learnt to play the piano.

HookTheory is an excellent tool for my needs.

I like the options to select chord progressions or just the next suggested chord.

I play by ear, so I make a selection, and if it sounds right, then it is.

Did wonder about the (phr)(loc) and (bor) that appeared below chord suggestion but guessed it was something to do with these more obscure scales.

It’s hard sometimes to avoid getting stuck in the same old sound. You find something that seems ok and then you find yourself just repeating the same old, same old! Know what I mean?

I wished there was a way of getting a random selection of melody notes and/or chords, say over four bars. Like a kick starter! I hope that makes sense?

The other thing I get stuck in a rut with is the rhythm and style I use. It is generally the same; I just need a way to break that tempo and style and try something fresh.

Enough of me going on!

Thanks again for the time you have given me. Please keep well, stay safe and enjoy your music!

What I do is to start the melody is to record a rhythm on the keyboard on one or two keys depending on my mood. That gets “something” in the measure. Then I adjust them up and down to where I want them.

There is nothing really obscure about the different modes and keys it is just choosing a different starting point (mostly). Each key has it’s relative minor. That is just starting on a different note with all the notes being the same for both. For C Major, it is CDEFGAB. For it’s relative minor, you just start at A and end up with ABCDEFG as the notes for A minor. The other modes are about the same with some extra notes being sharp or flat.

If the note is selected you can use the up and down keys to move it up and down the scale by scale notes. The period and comma keys move it up by one step regardless of the scale.

The same works on chords with the arrows.