Please make it so that we can alter the modes already given by selecting notes to flatten or sharpen so that we can have scales like the Mixolydian b6 scale or the Locrian #2 scale for example.

You could incorporate this into this menu: 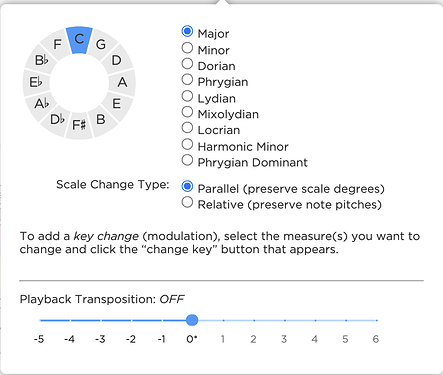 In this menu, you could do this:

If you don’t want to completely give the user freedom to alter scales however they want, you should at least add the rest of the inversions of the harmonic minor scale.

When we alter the scales Hookpad should also know how to name them. Like if you go to the minor scale and try to sharpen the seven it should automatically switch to the harmonic minor or they #7 should be grayed out because a scale like that already exists (The harmonic minor).

To those of you who agree/disagree say it in this poll:

Thanks for the feature request.

We understand that some of you are interested in exploring the theory associated with more exotic scales beyond what Hookpad currently offers. While I certainly don’t want to rule this out of Hookpad’s future, it’s not something that we are prioritizing at the moment, for a couple of reasons.

The first is that the goal of Hookpad has always been to offer users a simple way to view and compose chord progressions functionally, both to better understanding the reasoning behind chord progression structure and to use functional elements to compose music. Of course, while this system works pretty well for “popular music,” not all music is based on functional harmony, and there are many examples of pieces of music that do not fit naturally into Hookpad’s notation. No matter how many scales we add, this fact will always be true of Hookpad. So ultimately, we’re trying to strike a balance between allowing users the freedom to be creative, while keeping Hookpad simple enough that users, who might be otherwise afraid of or turned off by music theory, a tool that feels easy to use.

The second reason is that as many of you know, we’re a pretty small team of developers, and are trying our best to build something in Hooktheory that is most impactful for you all. Many of you have really great ideas for us, and we do really appreciate your feedback, but as we have a long list of things we’re working on, we can’t always put everything in the roadmap.

Thanks for your understanding