Modal and minor in Chord Crush

I want to point something out about chord crush :

There is no minor or modal stuff in the level up function.

Since the 2000 rating in the train function, the name of the chords doesn’t show anymore just the roman numeral. I’m getting more and more minor and modal chord progs as I progress but the progress on those are really slower since I don’t really know what the chordal scale degrees of modal or minor are… It’s really frustrating.

I know I could look up on the internet what the chord degrees are, print it out and have a look at it while playing but I hope that you would agree that this would be very unpractical.

Furthermore, I would add that I know that this idea of things getting more difficult might seem cool and challenging but truthfully sometimes I would really like to still be able to see the name of the chords… I know the benefits of the RNA system but in the real world who would say to a band mate “play a iii 6 4”

Thanks for the feedback. We have new levels planned for Level Up, and one will include levels with non-major scales.

Regarding seeing the chord names, this is a setting, so it’s possible that you have it turned off? Fwiw, in my experience if your bandmates know relative notation, it’s actually makes jamming pretty awesome! 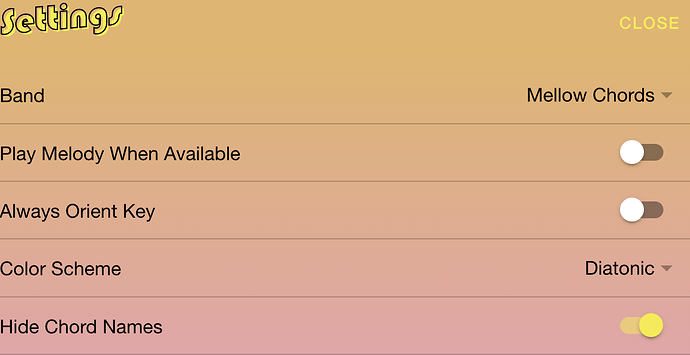 Good to know about the new Level Up levels, can’t wait

Regarding your point about the setting. I thought it was something that happened at the 2000 rating. When I was around that rating going below and above several times, when the rating was over 2000 the name of the chords automatically disappeared.
I’ve seen that setting before but it didn’t do anything (at least past the 2000 rating), and I’ve just tried turning it off and on again, right now after seeing your reply, but it doesn’t change anything. Are you sure that the setting is working properly ??? Am I doing something wrong ?