How do I create a simple slash chord? Ex. Bm7/E? I’ve looked at other posts in the forum, but no one seems to answer this question? I’ve typed in Bm7/E in the “type of chord” search field, but nothing comes up? Is there any way to accomplish this feat?

Slash chords aren’t a thing (yet?) in Hookpad, but you can use the “Tone Sets” feature to help find it:

Closest I could get is an Em7(sus2sus4). 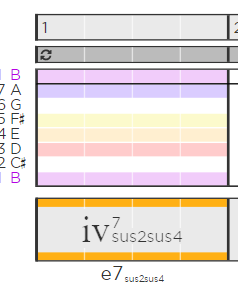 Hookpad organizes its chord by function, rather than by chord name. For example, inversions of I and V in C major would be: C/E, C/G, G/B, or G/D.

Bm7/E isn’t really a “simple” slash chord, and to understand how that chord functions takes a bit of music theory.

To get this chord into Hookpad we need to first ask which key we’re in. For example, that chord probably doesn’t have a lot of function in C major, but may make more sense in G major or E minor instead, where the F# is diatonic. An Em9 in the key of G is a vi9, so its suspended version would be vi9sus4

You might wonder, what’s the purpose of thinking of this chord as an Em chord rather than an a Bm chord? The reason is because its musical function will act much more similar to an Em chord, and your knowledge of how Em chords work in G Major will help you understand how to use this chord in your songs.

Here I’m using the fact that I know that vi chords are good bridges between I and ii and I’m using the dissonance from the 9th to inform the complexity of the other chords.